Benjamin Bratt, Noah Le Gros and Mohamed Karim round out the principal cast on the story about a former mob enforcer released from prison after 22 years who sets out to find the people who framed him.

“We are excited to collaborate for the fifth time with the legendary Nicolas Cage,” said Ward. “Following the success of Mandy, we cannot wait to take audiences on another adventure.”

Fraser added, “After our experience collaborating on Terminal, we are delighted to be partnering again with Mark and the team at RLJE Films. A Score To Settle has found its perfect home and we can’t wait for audiences to experience this action-packed ride come summer!”

“We at Goldrush Entertainment are thrilled to have worked with Nicolas Cage who brilliantly embodied the complex character of Frank Carver,” said Gozlan. “We are ecstatic to have found a home for A Score To Settle at RLJE Films!”

“It has never been more difficult to produce a truly independent film,” said DeWalt. “We are delighted to have amassed such an outstanding cast for A Score To Settle and to be working with great distribution partners such as the Highland Film Group and RLJE Films.”

RLJE Films has acquired A Score to Settle, an action thriller starring Nicolas Cage that reteams the Mandy star with the indie horror hit’s distributor. The latest pic will hit theaters day-and-date with digital on August 2.

Directed by Beautiful Boy‘s Shawn Ku from a script from Get Shorty‘s John Newman, the plot centers on a former mob enforcer (Cage) who is released from prison after serving 22 years for a crime he didn’t commit. He sets out on a path for revenge against the people who wronged him. Benjamin Bratt, Noah Le Gros and Mohamed Karim co-star.

The deal was struck by RLJE Films’ Mark Ward and Jess De Leo with Arianne Fraser and Alana Crow from Highland Film Group, which is also handling international sales.

The revenge action pic, in which Cage plays a former mob enforcer, will be shopped at Cannes by Highland Film Group.

END_OF_DOCUMENT_TOKEN_TO_BE_REPLACED 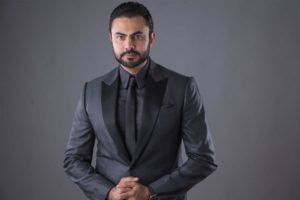 Nicolas Cage has landed a bona fide international medic for his new movie – Egyptian doctor-turned-movie star Mohamed Karim will play a fearless hitman in the project.

The actor, who entertained 100 million TV viewers as the host of hit talent show The Voice throughout the Middle East, and landed the Best Actor award at the Monaco International Film Festival for his movie Facebook Romance, graduated university in Cairo and obtained his Master’s degree in Physical Medicine, Obesity and Weight Reduction before setting his sights on Hollywood.

In the new movie, A Score to Settle, Cage plays a hitman out for revenge on his former mob bosses, including Karim’s character, after two decades of wrongful imprisonment.

Mohamed admits the film, which also features Benjamin Bratt, was a great project, with which to launch his Hollywood career.

“I had an amazing experience,” he tells WENN. “All the action scenes are between me and Nic in the movie, which is awesome. I did all my own stunt scenes… I just felt I wanted to do it. I felt like I wanted to have the whole experience.

That meant spending four months trying to get into the head of a killer with no fear of death: “I worked on what was not written in the script,” Mohamed adds. “I asked, ‘What is this guy like when he’s at home?’

“My character, Jimmy the Dragon, fears nothing. He doesn’t fear death at all… and that was really interesting to me. Who doesn’t fear death? It’s something that’s totally not me. You have to really believe this could be you.

“For, like, three, four months, I worked on that and tried to change my behaviour, the way I talked, my body language.”

And it appears the homework has paid off – Karim has just landed another major role opposite another big star.

“I can’t talk about it just yet, but this is going to be a very big film,” he says with a smile.
Karim is about to become the first Egyptian star and leading man since his mentor Omar Sharif to make it big in Hollywood, and he feels sure he has the late movie legend looking out for him from beyond the grave.

He befriended the Dr. Zhivago star before he died in 2015 and Omar offered the Hollywood hopeful advice and guidance.

“Omar Sharif was a friend of mine,” Mohamed explains. “Everybody loved Omar. We met several times and he was so helpful. We sat down for dinner and I told him this is my dream… I told him I wanted to do characters away from stereotypes.

“He told me what I should do and what I shouldn’t do from his own experience. He made Dr. Zhivagoand Lawrence of Arabia before he came here to Hollywood and he started big. He boosted my desire to do what I want.”

“I’d really like to build bridges between Hollywood and the Middle East,” the actor explains.

View the Story on hollywood.com